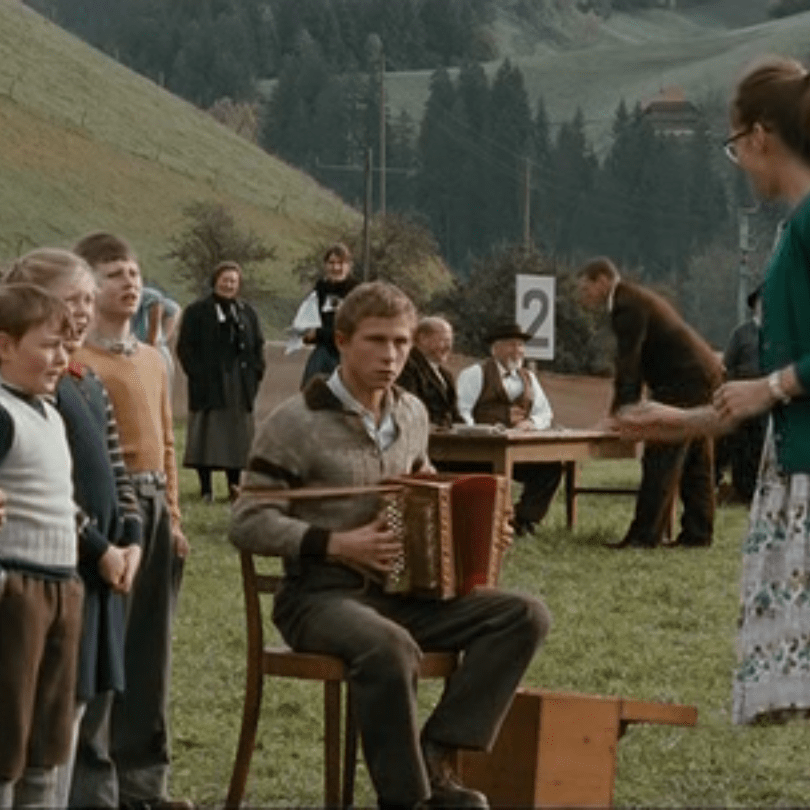 We begin in the Deepest, Gloomiest Emmentaler Alps, where the abusive Bösiger family take on two teenagers to work on their failing farm: Max, the accordeonist orphan, and Berteli, a fragile townie from a broken home.

Wait, stop, you tell me. That family has the word “bös” in it, the Swiss German word for “evil.” I mean, Der Verdingbub won Swiss Film of the Year 2012. The film wouldn’t be that unsubtle…?

But wait! The young teacher Fräulein Do-Gooder has also arrived in the village. She made the long journey from the 21st Century, where she studied Empathy and Millennial Self-Awareness. Can she save the day?

I’ve been a bit mean describing the plot. The performances are decent, the pace never drops, and the main character of Max has some enjoyable mystery about him. Helvetophiles might enjoy how traditional tropes like chocolate and Schwingen (Swiss wrestling) are cast in a dark light, and I also discovered my new favourite children’s song: “Wänn eine Tannige Hose hät”.

So yes, definitely worth seeing, if only for those reasons, and to get familiar with the discourse surrounding this “Dark Chapter of History”. As a film, though, it’s not much cop.

Swissness Difficulty Level: Chasseral (beginners)
Language: Swiss German (a difficult to understand Bärndütsch)
Availability: The film is a recent success and is probably available from your local Swiss library or on streaming websites. The DVD version has English and High German subs, maybe one of the streaming sites does too.

Der Verdingbub is the fucked-up emo brother of the ultimate Swiss fostering fairy tale, Heidi. Both the orphans Heidi and Max live in a farm near a small town: Alp-Öhi’s cabin is high up near the heavens, and the Bösigers live down in a valley, closer to the gates of hell. This makes sense: Markus Imboden, the film’s director, had already made a version of Heidi back in 2001.

The film illustrates a certain Dark Chapter of Swiss History. The foster child system of “Verdingkinder” was going on as Heidi was being written in 1880, and it continued for another 70 years, repressed in the collective consciousness while Spyri’s tale was taken into the canon of nationalist myth.

The BBC have a fantastic article which explains and contextualizes the Swiss use of children as indentured labourers. In short, from the high industrial revolution to the 1960s, children like Max and Berteli with no familial financial support (and, horrifyingly, the offspring of the Yenish travelling community) were forced to join foster families.

Sometimes this went well. Often, though, the system was used by Switzerland’s farmers simply to find cheap labour, resulting in many cases of abuse both in the fields and back in the farmhouse.

If you are interested in the historical context I’d recommend clicking the BBC article link above. It does a fine job of showing the insidiousness of the system from various angles – a much better one than this film, in fact.

Why is this film so average, when the subject matter is so intriguing?

To answer this question, we should probably see the film in the context of a public awakening to the horrors of the Verdingsystem. In 2009 a highly successful exhibition on the topic began, featuring photographs of the poor children and archived reports on them. The exhibition was a big deal, since a Bundespräsidentin opened the exhibition and thereby made the first governmental acknowledgement of the scandal.

The talk at the time was of creating a compensation fund for the surviving abused kids, most now nearing retirement age or older. Unfortunately, lobbying groups from certain churches and farmers’ unions expressed opposition to footing the bill. A popular initiative was in the works – the Swiss would exercise their powers of direct democracy, collect a petition of 100,000 signatures, and demand compensation money.

Imboden and his team would have known that such a petition would carry more weight if voters spent weeks watching his extremely emotive movie guiding them towards an opinion.

(Brief spoilers of the ending to follow.) This is speculative, but really helps make sense of this film being a violent tearjerker instead of a more nuanced take, say, on the psychology and logic of the authorities who enabled the Bösiger-types (à la Bodmer in Die Schweizermacher). Valuable film time is wasted on obvious emotional beats – and on giving us a role model, the insufferable teacher-saviour figure. At one point she literally says: “I’ll write a report and send it to Bern!”

Seeing the film as benevolent propaganda also explains its awkward ending, in which the Bösigers’ evil is revealed. Suddenly there is talk of a full investigation, and Max is soon on the road towards his happy end. Look, citizens, what we can achieve if we support the forthcoming parliamentary motion!

Just to be clear, I’m not saying the Wiedergutmachungsinitiative (Reparation Initiative) was a bad idea. When it was finally implemented in 2016 – four years after this film was a big hit – the surviving Verdingkinder could apply for CHF25,000 each, and received a public apology.

I just think it’s hard to make a film which finds success at the box office, makes a clear political statement, and is actually good.

References: To complement the BBC article above, this SRF Dok covers both the history and the politics behind the popular initiative in 2014.