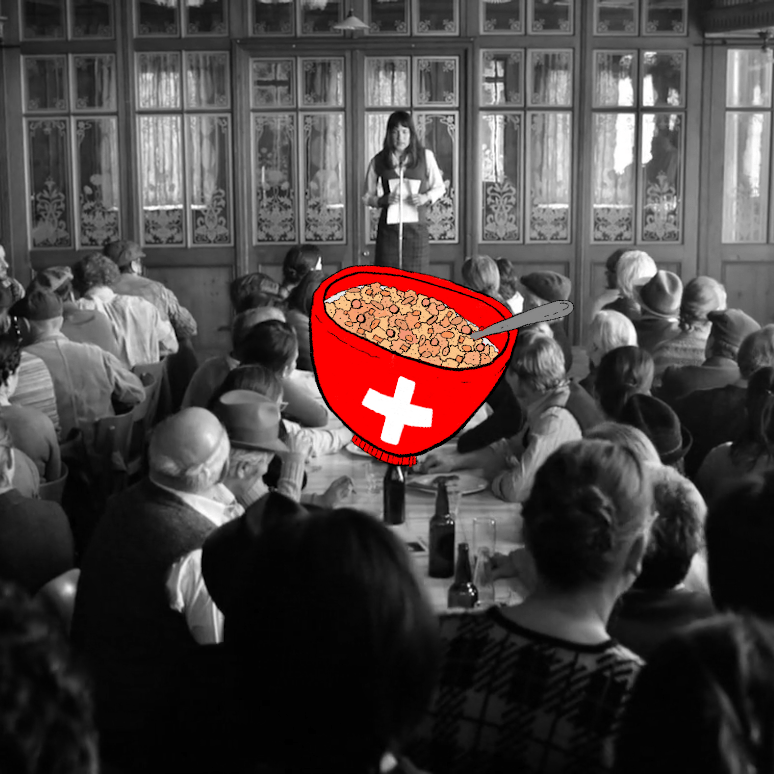 For the 50th Anniversary of the women’s right to vote in Switzerland, I asked some fans of Die göttliche Ordnung (see review here) why they’d recommend it. I also asked their opinion on the fight for women’s rights today.

Five women replied. All were Swiss Germans aged 30-50 and based in the Zurich area, and all took part in body or spirit in the Women’s Strike of 2019.

Q1. Why would you recommend Die göttliche Ordnung to foreigners for learning about Switzerland?

The Zürcherinnen gave a wide range of reasons. Four repeatedly came up.

1. Debunking the Myth of “Progressive Switzerland”

“Swiss people tend to perceive themselves as very ‘progressive’ in all respects, including equality or sexual orientation or… you name it), which is a rather distorted view, in my opinion.”

“Many people (in Switzerland and abroad) are not aware of how recent women’s suffrage was introduced in Switzerland.”

“As an educated and self-determined woman, it’s easy to forget that it was completely different – a ‘progressive’ society like Switzerland was ‘backward’ for so long.”

“I love the characters and how some women grow and develop through the course of their fight for women’s rights – that is what it’s all about isn’t it? Women should become more self-confident and stand up to their male counterparts. I also loved how they explore their own sexuality and learn about their own sensuality and needs. This very much goes hand-in-hand with owning the right to vote.”

“I think the little support women get from women in Switzerland is something sad but still true, and that is one of the problems for women who want(ed) to break with traditions and customs.”

“I want to value the effort, the determination and the fight of all these women.”

“The film depicts the Italian immigrant as more progressive with respect to gender equality than the locals. I think this clashes with the self-perception of many Swiss.”

“In the movie you see all these women, some are pro, some are against… Meanwhile, other countries had that for so long already!”

“The women needed their husbands’ (written) permission in order to be allowed to accept a job. I mean, seriously. What does this tell you about Switzerland? My mother experienced that personally.”

“The film shows how hard the struggle was and still is for women who think out of the box.”

4. Mix of fun with insight

“I love films with a non-fictional and historically important setting, even if the story is somewhat fictional.”

“It’s easier to watch such a movie than read historically about it or watch a documentary. It’s INFOTAINMENT about a topic which is important to me!”

“It manages very well to combine entertainment with insight into the recent past of Switzerland.”

Each interviewee had their own very specific set of reasons, but a pattern emerged with three themes standing out.

“Equality is not yet reality. Women earn less, are less likely to be promoted, are taken less seriously, less believed, suffer much more violence and abuse. Aaaand a sad fact: As soon as more women enter a job, salaries drop, and vice versa with men entering formerly male jobs.”

“It is incredibly important to raise awareness for the still existing inequalities and to point out that there is systematic gender bias involved (e.g. thinking about care workers).”

“It’s still important to make the Swiss aware of the inequalities that still dominate the professional and domestic world.”

2. To demand specific changes to the law

“The law still does not ensure that Article 8 of the Constitution [see below] is implemented. What I mean is:

“Where I see inequality in particular is the system around parenthood. Maternity leave is very short – it should be replaced with sharable ‘parental leave’. On top of that there are not enough part-time possibilities for fathers and mothers. The daycare centres are super-expensive, so women have to choose – would I rather stay at home, or go to work to pay for the daycare? The system is far more supportive in Scandinavia.”

3. To fight sexist socialization and stereotypes

“In Switzerland I think many problems are in people’s heads. If a mother works full-time, women make her feel bad for neglecting her child.”

“There are a bunch of problems with socialization and stereotypes. Women in STEM, girls that play soccer, men that train to be nurses, etc.”

“I often notice men and women live in two different realities and I will never live in the man’s one, and that makes me tired. The supposedly ‘feminine’ traits like compassion, caring, being emotional, intuition etc. are often labelled ‘weak’ or too spiritual and naive, whereas ‘male’ ones like strength, endurance, fighting etc are things that everyone wants.”

You can read the SMD review of Die göttliche Ordnung here. Next week’s documentary, De la cuisine au parlement, gives an excellent overview of the fight for women’s rights.