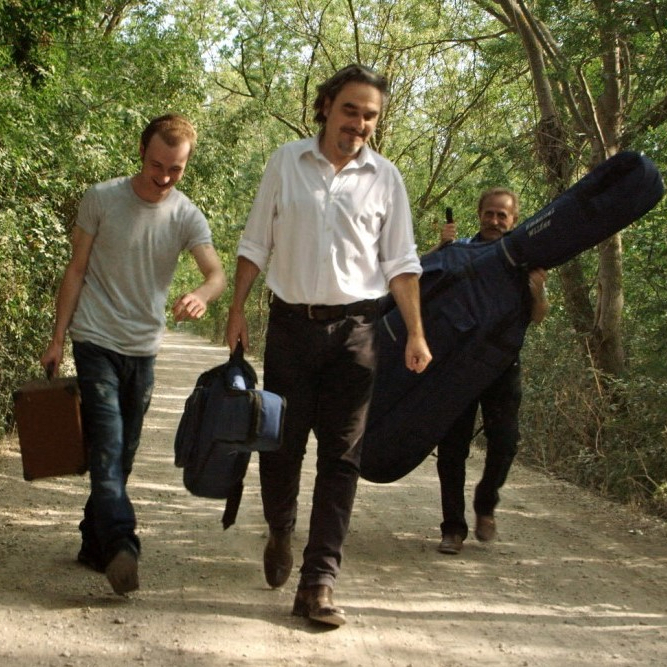 Unerhört Jenisch visits several Yenish families in the Graubünden and Appenzell regions. They are the descendants of travelling people, related to the Roma and Sinti – what we English speakers used to call gypsies. My earlier review of the documentary Die letzten freien Menschen details their traumatized recent history: scapegoats, the subject of a kind of ethnic cleansing.

The focus here is on the Yenish traditional music typical to the Alps. Family members discuss growing up around fiddles and accordions, relate anecdotes and give many private and public performances. Loosely holding it all together are interviews and performance footage of the legendary Swiss musician Stephan Eicher, who himself grew up in a Yenish musician family which feature prominently in the movie.

Some older Yenish, including Eicher’s father, recount brutal anecdotes of how their kin were segregated at school, turned down for jobs, ripped away from their mothers, and systematically abused in children’s homes.

But the main thrust of the film is how certain forms of Swiss folk music, collectively known as Ländler – what the Verdingbub Max played on his “Schwyzerörgeli” – was intimately related to itinerant Yenish musicians. My Swiss co-viewer and I were expecting “gypsy” violins, hollering and flamenco-style clapping, but we got something quite different – straight from a Heimatfilm. Because the pure, uncorrupted sound of patriotic movies like Heidi was in fact a sort of musical co-production with that “uncivilized race” which was meant to be wiped out of Switzerland.

Unerhört Jenisch lacks focus. The directors sometimes flirt with the narrative of Eicher discovering his family’s traumatic past – an older lady repeats her mother’s shocking mantra: “Never take money from the state, or they’ll take your children away”. But we always return to surface-level chatter about music.

The term “Ländler” is a slippery one that incorporates different melody patterns and instrument constellations, but that isn’t addressed with enough depth. The viewer at least picks up that the development of accordion-type instruments is very important to this musical history. Mid-way through the film, a Yenish musician mentions how he once picked up a blues harmonica, and its similarity to the accordion struck him immediately. I love blues, another genre with its origins in a systematically oppressed people, so at that moment I wanted to see the instruments’ technical similarity, hear them played, and get a musician’s insight into their sound. But we’d already moved on. For a film with this theme, I learned surprisingly little about music.

There are too many characters presented, and they deserved a more patient camera. How angry must these people be that, although their music is co-opted to instil regional patriotism and impress wealthy tourists, they themselves live poorly? By framing the families in the context of this horrific history, but not probing beyond what they feel comfortable talking about, it sometimes feels like the camera participates in a collective repression.

On the plus side, as a foreigner I came away wanting to know more about Swiss folk music traditions, about the Yenish, and about Stephen Eicher, who seemed a thoughtful and sensitive bloke. The film made Swiss folk music seem more accessible and less nationalistic, so in that sense, I salute it.

Swissness Difficulty Level: Säntis (intermediate).
Language: Swiss German. Various subs around.
Availability: It’s on Vimeo, but sadly not in Switzerland. Something called “Sky Store” might have it, I never used them before. My copy was from the local library.

Online, Stephan Eicher is described as “Pop-Chansonnier”. Eh? Time for a bit of detective work.

On the hit 1991 album Engelberg, Springsteeny pop-rock in English sits next to Swiss-German folk rock with a big backing band. The songs have that 80s expansive, rich production sound. It’s very radio friendly, and surely translates very well to big festival singalongs. Flash-forward to 2012’s L’Envolée – very chanson française. Most of it’s in French (Eicher sells well in France); the band is stripped back and the guitar’s acoustic. It makes for good background music over a glass of wine.

Eicher jumps from French to English, Bärndütsch or German, which is quite jarring if you’re not used to it. In terms of content, these are character sketches, emotional tableaux and explorations on a theme – the word “literary” comes to mind, even if the language is simple. The 2007 album Eldorado was co-written by popular Swiss author Martin Suter.

From that album, the song “Weiss nid was es isch” (“Don’t Know What It Is”) is featured predominantly in Unerhört Jenisch.

It’s a fine song, whose Swiss German lyrics suit the film’s theme of addressing a difficult past:

Translation
Do you feel that inside?
Very deep inside
Very, very heavy
I don’t know what it is
But that’s where I come from

These lyrics also hint at the difficulty of finding a truly “homely” popular music in a small, heterogenous country with a huge foreign population (and a consumer appetite for Big American Culture).

A personal note: the first German language track SMD ever loved, back in his student days in Manchester, was a 1981 dystopian post-punk banger called “Eisbär” (“Polar Bear”). I’d always thought it was from Hamburg or something, but it was actually recorded in St. Gallen! The band was called Grauzone, and a young Stephen Eicher was a member – his brother Martin sang the vocals.

Neue Deutsche Welle is German speakers doing post punk and new wave, and suffered the same fate – starting out experimental and kind of tangential anarchic, like “Eisbär”, before imploding into synthesizer cheese. The other decent songs I was familiar with as a foreigner were Nena’s indie disco choon “99 Luftballons”, Extrabreit’s pop-punky “Hurra, Hurra die Schule brennt”, and Falco’s irony-boogie “Da, Da, Da” (all German, not Swiss).

“Eisbär” has THREE connections with landmark Swiss movies, one of which has already featured on this website.

The band’s name comes from the 1978 movie Grauzone, an allegorical drama which voiced a lot of urban Swiss German discontent and was a portent of unrest in the early Eighties. Both the film and the band have that post-punk vibe of “we are unhappy and angry, but don’t have the words to say how, so we experiement with form and genre to express it”.

Secondly, a legendary punk documentary called Züri Brännt (1981) documents that very specific period in Zurich history in which young people protested violently against the lack of cultural spaces for them in the city. The song “Eisbär” was an anthem for this youth movement’s Weltschmerz.

Finally, the recent animated children’s movie Ma vie de Courgette (“My Life as a Courgette”, 2016) includes an awesome disco scene in which the kids rock out to “Eisbär”. If you want an insight of the writer’s happy memories from the pre-Switzerland era, substitute the main kid in this clip for an awkward, skinny 19-year-old, and the log cabin for a sticky-floored club in Manchester city centre.