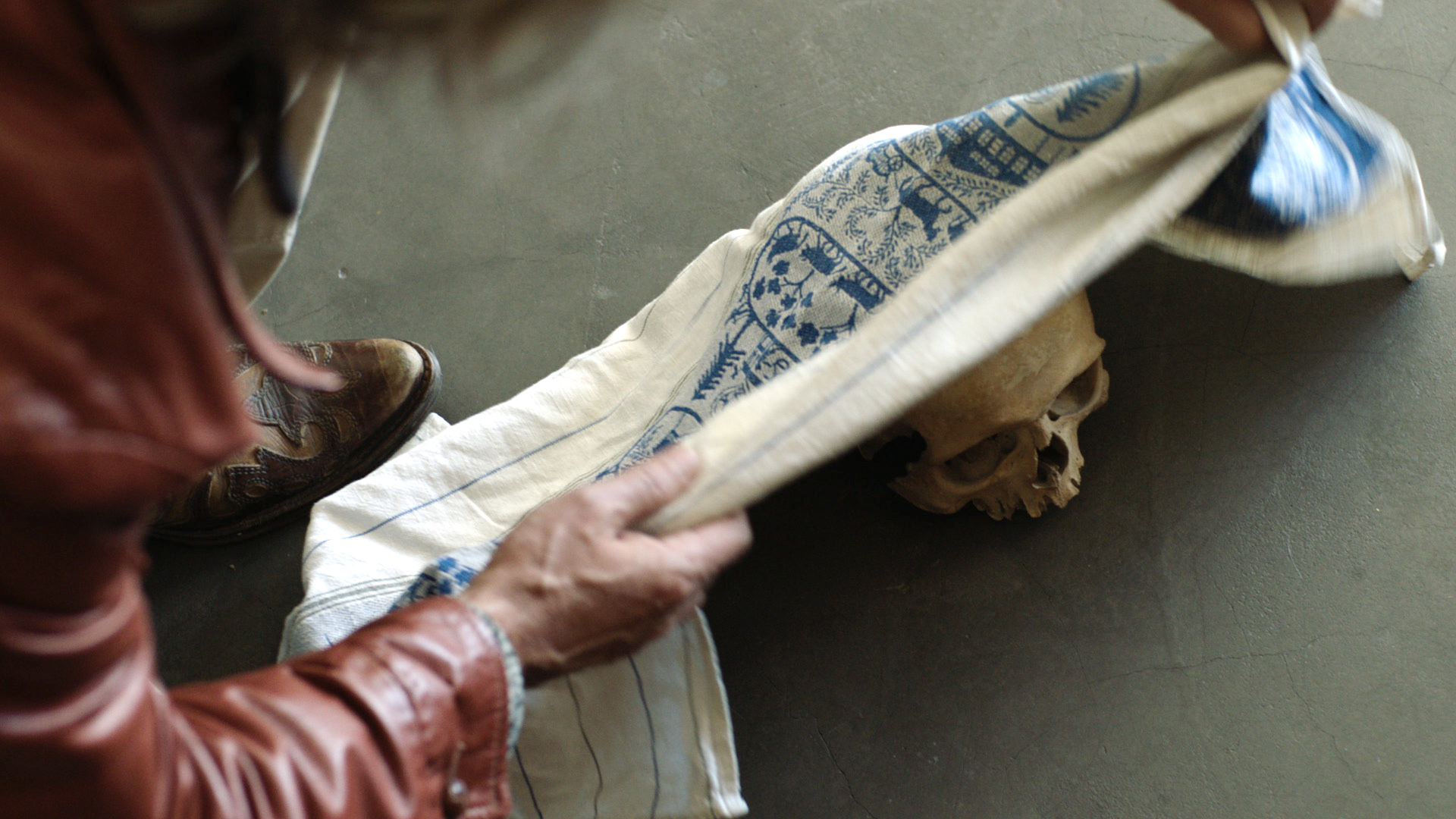 In the 1980s a group of teen outsiders formed in Samedan, a small town in the Engadine Alps. They listened to Krokus and the other Swiss rockers that passed through the Hotel Croce Bianca (“White Cross”). Their rebellion took its cue from the the Zurich youth unrest of the time. Tragically, it also imported something else from the big city: heroin.

Zurich become an unlikely smack mecca due to its liberal policy on dealing and using. The young rockers of Semedan would drive north to city parks crawling with strung-out users. They bought grammes of heroin to take back home and smoke or inject under the vast white mountains.

Suot tschêl blau thaws some of the ice covering that era. It focuses on heroin fatalities – several young men who died from overdoses or drug-influenced accidents. The director Ivo Len lets survivors participants tell their stories, including troubled ex-addicts, relatives and friends, and a woman heroically committed to archiving the dark tales of the dead.

A forlorn parent speaks plainly about his son’s “goldener Schuss” (the “golden shot” which leads you to death by overdose). A pair of former addicts relate how they helped each other get off the drug. The Semedan community is referred to variously as ignorant, powerless, itself responsible, or itself a victim; blame, however, is not thrown around, neither at the drug itself, nor the addicts, nor the parents. The circumstances remain complex; the outcomes grimly predictable.

Interviews in Romansh and Swiss German juxtapose with dramatic footage of the snowy mountains, forests and rivers of the valley. The symbolism is clear and multifaceted: it stands for the isolation the young people must have felt there, the warmth they needed in each other and in the drug, and the layers of ice which have formed over the community’s memories. Like Grüningers Fall, the film clearly has a performative aspect – as well as recording the survivors’ stories, it aims to help them work through it.

At times, atmospheric shots of the dramatic Alpine setting dragged on. I wanted them cut short, and the interviews extended. I also wasn’t much keen on a “memorial room” motif in which interviewees gravely walked to a building and placed objects associated with the dead on an antique table. An interesting comment on preserving memory in a place of repression, maybe, but it didn’t make for riveting cinema. The film felt longer than its 70 minutes.

To be fair, I saw the film with two friends who were more forgiving of these slower, symbolic scenes. Despite not being Swiss, they related strongly; they’d both known youth scenes which used hard drugs to escape alienation. Both friends enjoyed the film and praised how sensitively the topic and the interviewees were treated. For that alone, the film is to be highly commended.

Suot tschêl blau is a sequel of sorts to the biographical documentary Zaunkönig (2017), which has more context, more presence from the documentary-maker, and a more intimate connection to individuals. It looks very complementary to the newer movie, and I look forward to watching it.

Swissness Difficulty Level: Säntis (intermediate). For more accessible films on the Swiss German heroin scene of the 1980s and 1990s, see Platzspitzbaby (2020) and Der Goalie bin ig (2014).
Availability: At the moment of writing (May 2021) it’s still out in selected cinemas.
Language: Swiss German and Romansh, with German subtitles for both.

Director Ivo Len is himself an Engadine native with a history in the hard drug scene. His programme notes for the movie provide some interesting context.

Len emphasizes how tough it was to get inhabitants to open up. In preparation for the movie, he made a room at the Hotel Croce Bianca his home base; when he told its proprietor why he was there, she was visibly shaken. This reaction was typical, with many locals either refusing to tell their stories or refusing to do so on camera. Len had to win their trust. The memorial room where survivors placed their objects was one way of doing that.

What happens when the tight Swiss rural community freezes over?

In Oberengadin in the 1980s and 1990s, the parents, siblings and friends who had lost someone did not necessarily have a choice about whether to speak about it or stay quiet. The village community proved incapable of speaking accurately about the issue of addiction and the subsequent tragedy. Conflicts between one’s personal situation and one’s position in society, accusations of blame, and shame all reinforced this inability to speak.

The heroin injected those kids with an ecstatic, liberating warmth. Meanwhile, it swept over their families like an anaesthetic. The Semedan community’s paralysis is revealed in fragments over the course of the interviews. One father reveals how when his boy died, a huge number of locals attend the funeral – many more than anyone would expect –to see what the priest would say about drugs. Apparently the locals then gossiped about how the father hadn’t cried at his own son’s funeral. “I did cry, a lot, but in secret, not in front of them.”

Len contextualizes the 1980s rockers’ scene in the changes that were taking place in Engadine. A lot more foreign traffic was passing through, and foreign workers arrived for the construction industry, bringing with them new perspectives. Meanwhile a younger, more liberal generation of teachers had started work in the schools. In the wake of the Zurich unrest, conditions were primed for intergenerational conflict.

The director repeats the phrase “social control” for the system of surveillance in the village. Nothing epitomized this more than the “Sain da not”, the church bells which sounded in the evening to dictate when schoolchildren were no longer allowed on the streets. The system was abolished, but left bad blood, and the “social control” remained in different forms.

Semedan needed tourists and the locals preserved the picture-postcard image of the monumental Alps at all costs, such as when they refused to install a vending machine for clean needles at the train station.

Is this another example of the community scapegoating we noted in Das Boot ist voll, Der Verdingbub and Die Käserei in der Vehfreude? The movie’s answer is more nuanced. Another parent describes how she had a group of friends over to dinner, and became bitingly aware that, in their gossip and chatter, everyone was avoiding mentioning her addict son. “Why is nobody talking about Fabio?” she accused them. Once the taboo was broken, people began opening up.

Where I come from in the North of England, admitting unpleasant truths bestows status. By saying something provocative about the my own terrible sex life, or my social awkwardness, or about something bad which happened to me at work, I can prove myself capable of coping with my own flaws, and make light of them as an antidote to repression. The Northerners’ willingness to embrace our own flaws and those of our nearest and dearest is an important part of the glue which holds us together. It also has a down side – we also “banter” with each other until those weaknesses emerge, and we make them the subject of humour which can cut very close to the bone.

In Switzerland more value is placed on self-reliance – people’s ability to cope with their own problems (see Margaret Oertig-Davidson, The New Beyond Chocolate). In the dinner table scene above, I suspect the mother’s neighbours didn’t address the “Fabio problem” because they didn’t want their friend to lose face as somebody who couldn’t look after her own family. The victim herself had to bring the topic up, to signal “I don’t mind talking about this weakness I have”, without knowing how her so-called friends would take it.

A difficult burden, especially when the nature of the problem, heroin addiction, was so dark and unknowable.

Here are Ivo Len’s programme notes.
Len is interviewed, along with his cameraman and one of the survivors of the Semedan scene, here.
Margaret Oertig-Davidson talks about Swiss self-reliance in The New Beyond Chocolate.